Halloween means the chance to dress up and have some fun, whether that fun entails of scaring the pants off your friends, or, as this list will explore, getting their pants off in a very …

Halloween means the chance to dress up and have some fun, whether that fun entails of scaring the pants off your friends, or, as this list will explore, getting their pants off in a very different way.

We’re taking a look at the top 10 sexiest superhero Halloween costumes. And, because many of the mainstream versions of these costumes are pretty meh, we’ll be looking at some real cosplays who are donning the very sexy costumes we’ll be talking about.

And, we’re featuring both women AND men on this list, cause hey, it wouldn’t be fair to just stick to one when both can be so equally sexy. Let’s get to it.

Power Girl DC’s power girl has always had a pretty revealing costume for the most part. 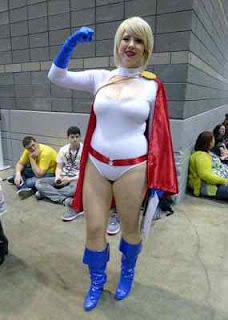 Specifically around the chest area. So you can imagine how that could make one hell of a sexy costume.

Well, cosplayer and glamour model Marie Claude Bourbonnais – from Quebec in Canada – gives us an example of how sexy that can be with her rendition of the contemporary Power Girl costume.

Captain America You don’t need to flash a ton of skin to be sexy. 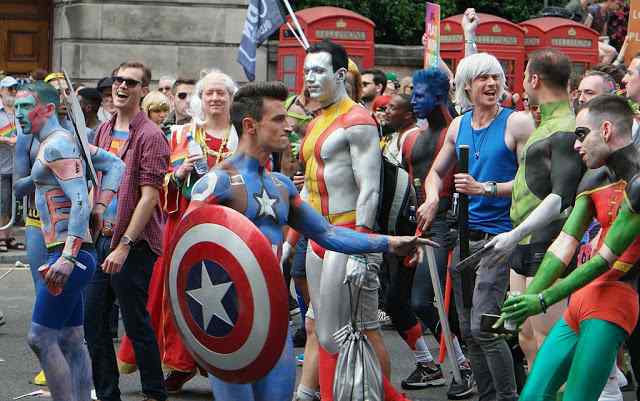 Which is something cosplayer Michael Mulligan, aka captain cosplay shows us with this classic Captain America costume? With perfectly styled hair and a very detailed costume, this Cap getup is far from lacking charm, and definitely one way to have admirers flocking to you.

Gwenom Who said you have to sacrifice being sexy if you want to be scary? Gwenom, the cross between spider gwen and venom, can easily be both. 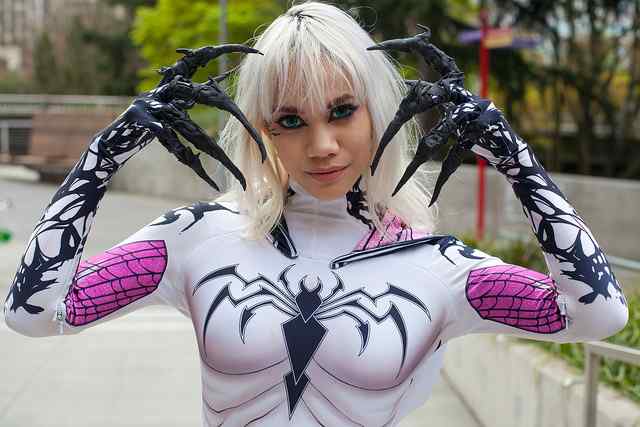 Spider Gwen aka Spider-Woman, along with Gwenpool, have gained some big cosplays fandoms, and with Earth-65’s Spider-Woman now getting her own Venom symbiote, it’s definitely a topical costume.

Cosplayer Jessica Nigri put together the outfit, which is noticeably different than the character designs Jason Latour released on June 27th.

Blade Vampires definitely have sex appeal. Aside from sucking blood and supernatural strength and whatever other abilities their specific lore has granted them, sex appeal is up there in their iconic traits. 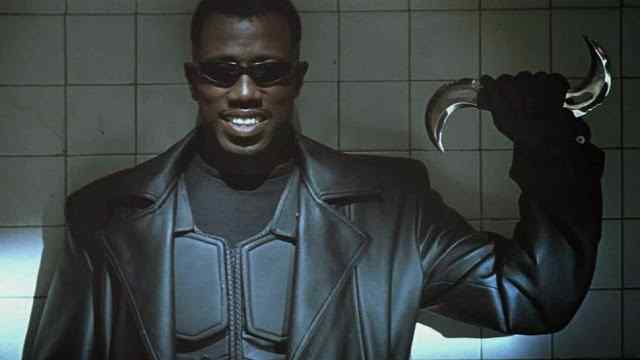 So instead of dressing up as an Edward Cullen Twilight vamp, why not go the Blade route? Yes, the jacket may be a little too 90’s Matrix for most of our likings, but Blade is one hell of a hot vampire, as we see here with cosplayer The Daywalker, who is actually the spitting image of Wesley Snipes. He’s even got the moves to back it up.

Scarlet Witch Similar to most of the other characters on this list, Scarlet Witch has had many different looks over the years, but has always stuck to her scarlet color palette. 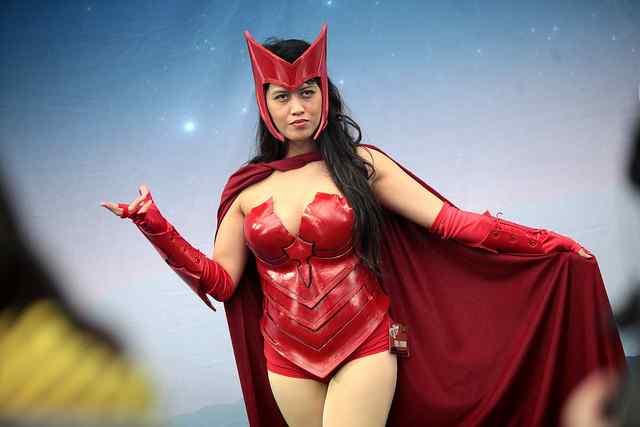 There’s the more punk version of Wanda, which inspired the costume design for film Age of Ultron. And then there’s the classic cape and crown look that has been revamped over the years, including with Scarlet Witch’s more recent solo series.

So let’s take a look at a pretty sexy version of that costume, worn by cosplayer Yaya Han.

Yaya Han was actually a part of the Marvel 2016 Cosplay Variant Cover series with this costume, for Scarlet Witch #10, and she gives a detailed outline on her website as to how she made it, which is pretty damn cool.

Wonder Woman is the most iconic female comic character of all time. Can’t argue that.

And with the success of this past year’s Wonder Woman film, it shouldn’t come as a surprise that many people want to dress up as her this Halloween. I mean, hey, body armor and confidence – it’s incredibly sexy.

Over the years she’s a character many cosplayers have dressed up as, but at this years new york comic con – 2017 if you’re watching in the future – there were a plethora of women rocking Diana’s threads. Or rather armor.

Catwoman, aside from our number one spot, is likely the most iconic sexy female superhero costume out there. 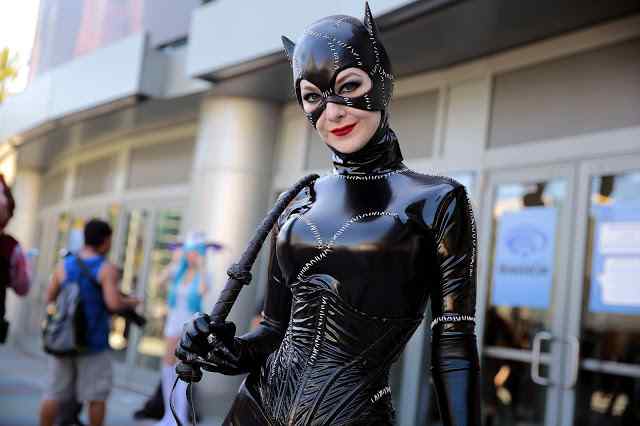 Inherently, Selina Kyle has always been a sex symbol and was actually created by Bill Finger and Bob Kane as a way to add more sex appeal to the Batman comics, appearing in Batman #1 in Spring of 1940.

She’s come a long way since that and has become one of the more complex and intriguing characters in the DC universe.

And hey, who doesn’t want to dress up in a leather suit and cat ears? Right? Here we see her being cosplayed by Nikki Steel.

Nightwing is arguably the sexiest male superhero out there. And by arguably, I mean, some of you will disagree, but most of you will be like YUP THAT’S ACCURATE. Now, I don’t need to go through the reasons why Nightwing is sexy – you can check out our top 10 sexiest male superheroes list for that – but cosplayer and model Michael Hamm is giving us one more reason why Dick Greyson is a total babe.

And how the Nightwing costume is without a doubt incredibly sexy. Also worth noting – Hamm does a really great Spiderman and Shazam cosplay, too.

Harley Quinn If you guys remember last Halloween – the Halloween of 2018 – you’ll probably recall a lot of pink and blue pigtails. And short skirts. 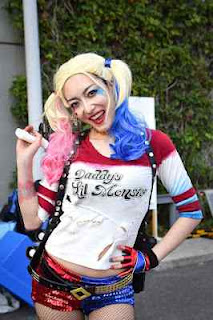 And oversized sledgehammers. Dozens and dozens of them. In other words, girls dressing up like Margot Robbie’s Harley Quinn.

It was the most popular costume of that year, which makes sense, because it’s sexy as fuck.

And while the trend this year may be dressing up as the demonic clown from It, there’s bound to be many ladies still donning this costume this year, too. Because, well, it’s kind of hard to top in the sexy department, isn’t it?

Aang from The Last Air Bender When you think of Aang from Avatar the last Airbender, I’m sure that the first thing that comes to mind isn’t DAMN. 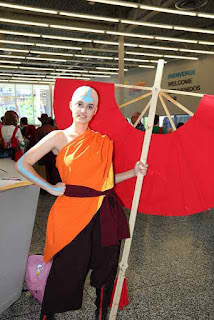 But here we have an example of how that opinion can be reversed when an adult male is in his threads.

A cosplay artist from Finland, Elffi has put himself in many a sexy costume, with Aang likely being his hottest – even though he’s got quite the sexy cosplay game going for himself.

10 FEMALE CELEBRITIES IN MUSIC WHO ARE 5’1 AND SHORTER!